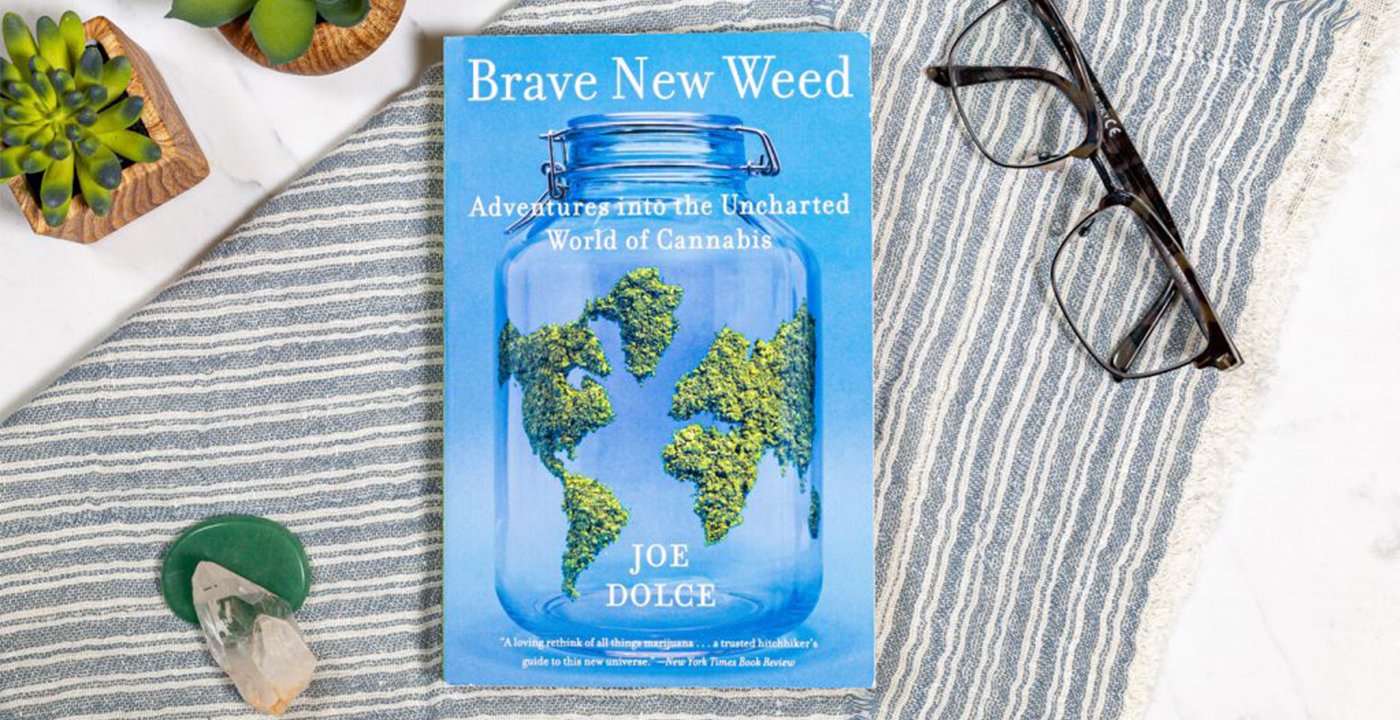 "What is a weed? A plant whose virtues have not been discovered."

What is a weed? A plant whose virtues have not been discovered.

Looking for a good book to read on the beach or by the pool? Grab your sunscreen and dive on in to “Brave New Weed” by Joe Dolce.

Joe Dolce is a journalist who set out on a “quest to understand the clouded past and bright future of weed.” Dolce wasn’t new to cannabis, like others in his generation he smoked pot in college (and few times since) but for the most part considered it a part of his youth. One fateful day, Dolce’s cousin showed off a fresh harvest he had grown in his basement with pristine dedication. A few puffs of Super Lemon Haze later, Dolce was inspired to set off on a journey to reacquaint himself with the plant and explore the future of it.

As he slowly reintroduced cannabis into his life to help relieve common middle-aged aches and anxieties, Dolce was surprised to discover that many baby boomers smoked and, like him, were hiding in a “cannabis closet of [their] own making.” But why? Huge cultural shifts were paving the way for acceptance of cannabis to spread like wildfire, not only in the U.S. but worldwide.

How would society adapt to widespread legalization? What would the world look like once this plant became as commonly accepted as wine or beer? Dolce decided to travel the world in search of answers. Along the way, he wondered how he might harness cannabis to suit himself as an “engaged, responsible, and professional adult.”

During his travels, Dolce met world-class researchers, entrepreneurs, historians and cultural movers and shakers who help him discover the power of cannabis and the impact it has on individual lives and communities. As he tells his story, you find yourself stepping into the shoes of people who have dedicated their lives to cannabis; those who are motivated by their love of science or the plant itself, not necessarily for the love of getting high.

Dolce travels to Israel to meet Dr. Raphael Mechoulam — widely considered to be the world’s foremost expert on cannabis – a man who, despite his passion, has never actually smoked it. In his lab, Dr. Mechoulam pioneered the discovery of the individual THC & CBD molecules and the endocannabinoid system, the largest signaling system in the body. He sees cannabis as a potential wonder drug that could change the world with its ability to regulate the flow and balance of internal systems, maintain a steady heartbeat, regulate metabolic functions, and potentially even function as a parallel immune system.

Dolce shares Dr. Mechoulam’s story, along with many others, to widen the lens on our understanding of cannabis. His writing is clear, relatable and often funny – he recounts his own experiences with cannabis that is far more potent than the “baby ass weak” pot he knew in the 1970s, graphically detailing what his first time trying dabs in what he now refers to as “the Denver disaster.” In the first section, titled “Big Bad Scary Weed,” he takes you on a journey through the entire history of the plant, from when the seeds first sprouted in the ancient world “mostly likely in current-day Kazakhstan, ancestral home of Borat,” to the politically-motivated marijuana prohibition campaign of the 1930s (including the story of a key “expert” who claimed smoking marijuana turned him into a bat) to the heartwarming story of Dr. Lester Grinspoon, an almost accidental pioneer in marijuana advocacy whose son’s battle with cancer in the early 1970s became the inspiration for the seminal work “Marihuana Reconsidered.”

Dolce rounds out his journey by offering candid advice to the canna-curious of all generations, detailing the various intake methods and what to expect when you try them. “Smoke a puff or two, wait three minutes, and evaluate the direction things are heading. Stop if you’ve taken the wrong road… Save learning new activities for another time,” he (wisely) shares.

“Brave New Weed” is a compelling and compassionate account of the changing landscape before us. Dolce’s personal discovery of the “brave new world” reveals how cannabis can not only help heal but can (and maybe even should) become an accepted and integrated part of adult life. From the day his cousin asked, “want to see my new hobby?” Dolce knew his life had a new purpose — to lead himself and others to see cannabis as a key player in humanity’s never-ending pursuit of happiness, fulfillment, and a deepened connectivity to oneself and the world.