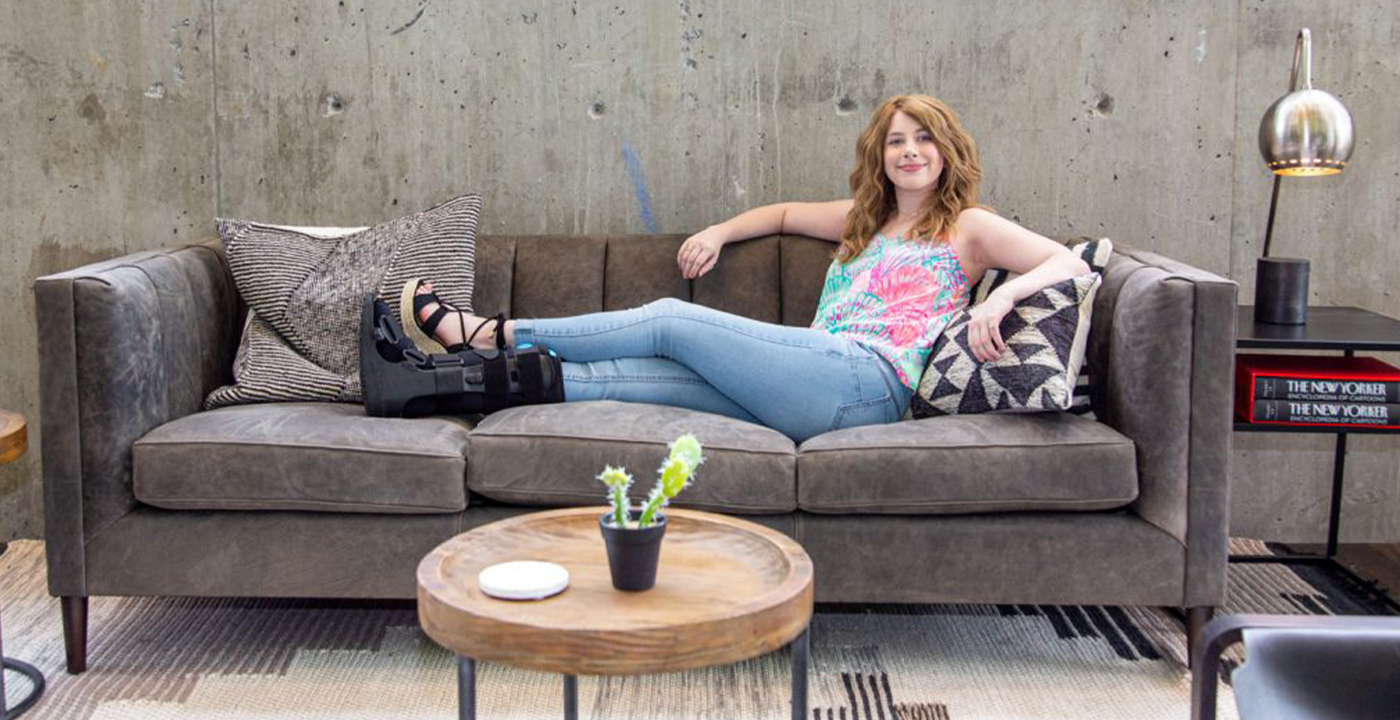 "Nearly 20 million people battle cancer each year throughout the world."

Cancer affects family, friends, neighbors and coworkers. Nearly 20 million people battle cancer each year throughout the world. Sarah Mulligan is one of our own. She’s our marketing intern and last week she celebrated her first year cancer-free. We’re sharing her story to bring hope to others in treatment.

Sarah was born and raised in Atlanta, Georgia. Now 22 years old, she would have finished her senior year at college last month. But a week before her 20th birthday, everything changed. She woke up and noticed a painful bump on her right shin. At first glance, her doctor said it was a cyst and would soon stop hurting on its own. A few months later the searing pain returned. This time the doctor thought it might be a fluid sack and told Sarah to come back in a few days for a CT scan. But Sarah was in the Emergency Room before then. That’s when the reality set in, “hm, this might be cancer.”

A biopsy confirmed the diagnosis: Ewing Sarcoma—a rare form of bone cancer. There are only 250 cases on average in the U.S. each year. Sarah got the news on August 18, 2017, two weeks before the fall semester of her junior year. Her treatment started on September 1st. The doctors said the estimated timeline, if all went well, was six months. Sarah’s response was, “Alright, come March, it will be done and over. Then life can go back to normal.”

But it wasn’t only six months. It was nine months, fourteen rounds of chemotherapy, three surgeries and two mental breakdowns. She doesn’t remember much of it because of the effects of her chemo. It wiped her memory, energy and temporarily removed her basic ability to walk or use her arms. Nausea was constant and she discovered new bruises daily. Blood labs every couple of days caused the vein in her right arm to collapse. Fevers were regular, and each one meant another visit to the hospital.

On the tail end of one particularly bad fever, Sarah woke up in diapers, hooked up to liquid nutrition and totally disoriented. She asked her mom how long they’d been there. Eight days. “If I don’t get out of here,” she thought, “I’m going to die.” She broke down.

Was this her new reality? What happened to college, going to parties and meeting boys? Instead she spent her days curled up in a ball, connected to tubes and wires and jumping between hospitals.

She says it would have been impossible to survive if it weren’t for her loving parents who never left her side, and the support of her sisters and friends.

The excruciating pain and distress called for a swarm of prescription medications. There’s the “I’m queasy” pill, the “I’m gonna puke” pill and the “I can’t stop puking” pill. Plus all the “I can’t take the pain” pills. Sarah claims that’s likely part of the reason she doesn’t remember anything.

When treatment started, her doctor prescribed hydrocodone, then oxycodone halfway through treatment. Sarah was on oxycodone for so long that she started hallucinating. Around Christmas, she stepped out of her bedroom and found enormous green ornaments blocking the bathroom. Another time it was a lake, surrounded by trees and overgrown nature. A series of hallucinations after leg surgery prompted the switch to dydromorphone (Dilaudid). It helped with the pain, but wasn’t as strong so she had to take it more frequently than the others.

Three months into chemo, a CT scan revealed a cancerous lump in her right lung. Two surgeries took place in November and December to remove it. A third surgery for her leg also took place in December. That’s when Sarah’s knee and a hefty piece of her shin were replaced with titanium. Eight cycles of chemo followed to ensure the cancer was removed.

Everything was supposed to be over in March 2018, but the end date kept getting pushed out until there was no tangible date to hold onto. Sarah kept ending up in the hospital for blood transfusions and fevers. It felt like it was never going to end. She broke down in February when she went in for a round of chemo and instead had to get another blood transfusion.

Would it ever end? Sarah immediately enrolled in an online summer economics course, scheduled to start in May. The class started on the day treatment ended.

Halfway through the course Sarah realized she wasn’t ready to go back to school. Now she’s taking the time to ease back into normality, knowing that it will never be the same as life before cancer.

Looking back on one year free of cancer and looking ahead, Sarah acknowledges a new outlook on life. And shares a stoic acceptance of the past.

Cancer is part of me. That doesn’t change even if the cancer is gone. I won’t dwell on the pain, but I also won’t pretend it didn’t happen.

“Cancer is part of me. That doesn’t change even if the cancer is gone. I won’t dwell on the pain, but I also won’t pretend it didn’t happen. My biggest regret is that I was in denial for so much of treatment. Instead of confronting and processing what was happening, I retreated from my reality and from myself.”

“There’s always the notion that life’s not easy, but you don’t realize it really until your thrown flat on your back. I went from doing anything I wanted to do, to being totally helpless and reliant on others. I learned that I’m not invincible. It’s a hard lesson, but humbling. The past two years gave me a new respect for life”.

Would cannabis have helped? Was it an option?

Looking back, Sarah says she definitely sees how cannabis could have helped her. It hadn’t even crossed her mind until shortly before the end of her treatment. The more she learned about it, the more she realized all the ways it would have helped with the side effects of chemotherapy. Many cancer patients have used cannabis to ease nausea, maintain a healthy weight and manage pain. Sarah believes cannabis would have given her a better quality of life during treatment.

If only cannabis had been accessible, Sarah would have at least had the option. Georgia’s Haleigh’s Hope Act was signed into law four years ago to allow the use of low-THC cannabis oil for people with certain medical conditions. Buying or growing cannabis, however, remained illegal. Patients were forced to violate federal law by finding cannabis out-of-state and moving it across state lines. As of April 17, 2019, House Bill 324 amended the law to allow businesses to produce and sell low-THC medical cannabis in Georgia. However, it may still be another year before medical products become available to patients.

Looking Toward the Future

Sarah has a tattoo on each wrist. Inscribed on her left wrist are the words “Never Give Up” with the roman numerals 11, 22 written underneath, denoting her cancer’s exact chromosome. On the other arm is the date of her cancer diagnosis. People ask, “Why don’t you put the day you ended treatment or the day you made it a year cancer-free?” She says it’s “bad DjuDju.” Cancer isn’t an open-and-close book. The longer you go without cancer, the less likely it is to return. But she’s not throwing out her leg braces any time soon. The day she was diagnosed with cancer marks the day her life changed forever.

I went from doing anything I wanted to do, to being totally helpless and reliant on others.

“I went from doing anything I wanted to do, to being totally helpless and reliant on others. I learned that I’m not invincible. I was always super impulsive before and encouraged wild behavior, believing rules are meant to be broken. If a friend asked me, ‘do you think I should get a nose ring?’ I’d say, ‘Do it!’ without missing a beat. And I’d probably tag along and pierce my naval. That’s all changed. I’m less impulsive and understand that rules are there for a reason.” She pauses and smiles. “Although, they can be bent every now and then.”

Someday, Sarah wants to visit Australia for the Dark MoFo music festival and the nude Polar Bear swim, be blessed by a Monk, join a séance, crash a huge wedding party, join a protest and take a road-trip down Route 66 in a red convertible, wearing a Route 66 t-shirt. If nothing else, all purely for the sake of experiencing life.

For now, Sarah swivels back into her cubicle. She sips warm tea from a ceramic mug, opens her laptop and settles into her workplace rhythm. She’s quiet and content. Happy to be here learning about how cannabis is helping people. And simply happy to be.